Forbert signed a recording contract with Nemperor in 1978, and they released his debut album, Alive on Arrival that year. Allmusic noted that it "earned critical acclaim for its taut, poetic lyrics".[2] Even though the sleeve of his second album Jackrabbit Slim (1979) stated that "Romeo's Tune" is "dedicated to the memory of Florence Ballard," the song is not really about the Supremes singer who died in 1976. The song was actually written about a girl from Forbert's home town of Meridian, Mississippi, but was dedicated to Ballard because, as Forbert explained, "that seemed like such bad news to me and such sad news. She wasn't really taken care of by the music business, which is not a new story."[6] The signature piano part on "Romeo's Tune" was played by former Elvis Presley pianist Bobby Ogdin.

Jackrabbit Slim was recorded completely live at Quadrophonic Studio in Nashville, Tennessee, and produced by John Simon, who had worked with The Band. On any comparison to Bob Dylan, Forbert said, "You can't pay any attention to that. It was just a cliché back then, and it's nothing I take seriously. I'm off the hook — I don't have to be smarter than everybody else and know all the answers like Bob Dylan."[7] Jackrabbit Slim peaked at No. 54 in the UK Albums Chart.[8]

Forbert also had a cameo appearance in Cyndi Lauper's "Girls Just Want To Have Fun" video, playing her boyfriend.

In 1984, Forbert had a disagreement with his record company (Nemperor), which apparently did not want to release a recording he made. The record was shelved, and contractual issues prevented Forbert from recording for a number of years afterwards. Although he has never again recorded a song as commercially successful as "Romeo's Tune", his first recording for Geffen Records, 1988's Streets of This Town, has been credited with "intelligence and maturity that bested most of his previous work".[citation needed] His The American in Me follow-up in 1992 was praised as "equally strong".[citation needed] Forbert has made music "steadily ever since, writing songs and singing them, on CDs and on the road".[7] His songs have been recorded by several artists, including Rosanne Cash, Keith Urban, Marty Stuart and Webb Wilder. 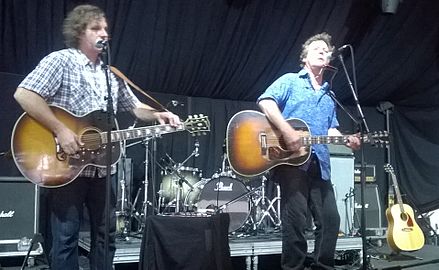 After many successful years, Forbert sought out new inspiration and found it when he relocated to Nashville in 1985. Forbert's tribute to Jimmie Rodgers, Any Old Time, was nominated for a 2004 Grammy in the best traditional folk category.[9] In 2006, he was inducted into the Mississippi Music Hall of Fame, and in 2007, Keith Urban covered his hit "Romeo's Tune."[10] The same year, Forbert's music was featured in the film, Margot at the Wedding starring Nicole Kidman.[11]

Forbert has written new music in support of the Occupy Wall St. movement[12] as well as re-releasing some of his earlier recordings on CD. One of his latest artistic adventures is photography. Using an old LG phone, an exhibit of his cell phone photographs opened at the Tinney Contemporary Art Gallery in Nashville in September, 2011.[13]

He has released a series of recordings, including his most recent release, 2012's Over With You (Blue Corn Music) which was produced by Chris Goldsmith.[14] Musical backing on the record included Ben Sollee on cello and bass, with Ben Harper guesting on guitar on several tracks. Reviews have been strong, with American Songwriter stating "it’s all lovely, melancholy, lyrically moving and beautifully performed."[15]

Steve Forbert released a music video, "Sandy," to raise awareness about the storm and its aftermath.[16]

Blue Corn Music in 2013 re-released Forbert's career-launching first two albums - the aptly titled Alive on Arrival, and its Gold Record follow-up Jackrabbit Slim. 2013 marks the 35th anniversary of the release of Alive on Arrival, and Forbert was to play that album in its entirety at a number of shows. That album was also chosen to be profiled as one of the greatest debut albums ever in the book Please Allow Me To Introduce Myself.