Bishop was born in Glendale, California, the son of Mylda (Kleege) and Elvin Bishop, Sr.[3] He grew up on a farm nearElliott, Iowa. His family moved to Tulsa, Oklahoma, when Bishop was ten. There he attended Will Rogers High School, winning a full scholarship to the University of Chicago as a National Merit Scholar finalist. He moved to Chicago in 1960 to attend the university, where he majored in physics. In 1963, he met harmonica player Paul Butterfield in the neighborhood of Hyde Park and joined Butterfield's blues band, and remained with them for five years. Their third album, The Resurrection of Pigboy Crabshaw, takes its name from Bishop's nickname.[2] During his time with the Butterfield Blues Band, Bishop met blues guitarist Louis Meyers at a show. Bishop convinced Meyers to trade his Gibson ES-345 for Bishop's Telecaster. Bishop liked the Gibson so much he never gave it back and has used it throughout his career. Bishop has nicknamed his Gibson ES-345 "Red Dog," a name he got from a roadie for the Allman Brothers Band.[4]

Bishop sat in with the Grateful Dead on June 8, 1969 at the Fillmore West in San Francisco. He opened the second set with the lengthy blues jam, Turn on Your Lovelight without Pigpen or Jerry. He played two more songs with the Dead, The Things I Used to Do and Who's Lovin' You Tonight.[6] 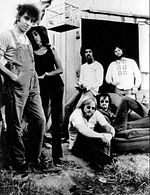 In March 1971, The Elvin Bishop Group and The Allman Brothers Band co-billed a series of concerts at the Fillmore East. Bishop joined The Allman Brothers Band onstage for a rendition of his own song, Drunken Hearted Boy. Over the years, Bishop has recorded with many other blues artists including Clifton Chenier and John Lee Hooker. In late 1975, he played guitar for a couple of tracks on Bo Diddley's The 20th Anniversary of Rock 'n' Roll album, and in 1995, he toured with B.B. King.[2]

Bishop made an impression on album-oriented rock FM radio stations with Travelin' Shoes in 1975,[7] but a year later, in 1976, Bishop released his most memorable single, "Fooled Around and Fell in Love", which peaked at #3 in the US Billboard Hot 100 chart (and #34 in the UK charts). The recording featured vocalist Mickey Thomas and drummer Donny Baldwin who both later joined Jefferson Starship.

Bishop feels that the limitations of his voice have helped his songwriting.[8]

During the 1960's and 70's he recorded for the Fillmore, Epic and Capricorn labels.

Bishop appeared at the 1984 Long Beach Blues Festival. In 1988, he signed with Alligator Records and released Big Funfeaturing Whit Lehnberg & The Carptones, 1991's Don't Let the Bossman Get You Down, 1995's Ace in the Hole, 1998'sThe Skin I'm In and That's My Partner (2000), on which he paired with an early Chicago blues teacher, Little Smokey Smothers. He later revisited Smothers in the studio, where the two recorded another album in 2009; Little Smokey Smothers & Elvin Bishop: Chicago Blues Buddies.

Bishop was inducted into the Oklahoma Jazz Hall of Fame in 1998.

His first live concert DVD, That's My Thing': Elvin Bishop Live in Concert, was recorded live at the Club Fox in Redwood City, CA on December 17, 2011. It was released on the Delta Groove label in October 2012. The DVD was nominated for Best Blues DVD of 2012 by the Blues Foundation. The same organisation announced that Bishop had six nominations for the 36th Blues Music Awards set to be held in May 2015.[10] He triumphed in three of them