Robert Gordon grew up in Bethesda, Maryland. At the age of nine, he was greatly inspired by the Elvis Presley song "Heartbreak Hotel" playing on radio, and decided to pursue a career as a Rock & Roll musician at that young age.[1]

His influences included Gene Vincent, Jack Scott, Billy Lee Riley, Eddie Cochran and other notable rock 'n roll music artists of the period. He made his recording debut at age 17 in 1964 with a group called the Confidentials. The Confidentials, with Robert (called Bob at the time) as the singer recorded the songs "Summertime", "Money", and "There is Something on Your Mind", among others on acetate phonograph discs.

When asked how he related to the 1960s, Robert replied "I didn't." He didn't care much for the British Invasion but he identified with soul singers such as James Brown and Otis Redding whom he saw, among other greatR&B acts, performing at Washington DC's famous Howard Theatre. During the turbulent times of the late 1960s, with the rioting and antiwar protests of the period, Robert served in the National Guard in Washington, D.C. "I didn't want to be sent to Vietnam," he recalls.[1]

Gordon moved to New York City in 1970 and a few years later joined a punk rock band there known as the Tuff Darts. During 1976, the Tuff Darts recorded "All for the Love of Rock and Roll", "Head over Heels", and "Slash" for a compilation album called Live at CBGB's, which included a number of other local New York City bands. That same year, Robert appeared in a punk/New Wave style film entitled Unmade Beds, an homage to Jean-Luc Godard by underground filmmaker Amos Poe. Blondie lead singer Deborah Harryalso appeared in the film.[citation needed] 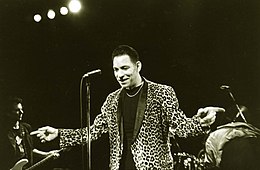 Gordon on tour with Chris Spedding in Japan, 2006

Record producer Richard Gottehrer discovered Robert during a rehearsal one afternoon with the Tuff Darts and soon afterward the two were talking about making a rock and roll record. Gottehrer was impressed with Gordon's baritone[citation needed] voice and his rendition of Elvis Presley's "One Night".[1] After some conversation, Robert suggested working with guitar legend Link Wray. Wray was contacted and he agreed to work with them both. "Robert to me sounds a lot like the early Elvis, back when he was at Sun Records," Wray would comment.[1] In 1977 Robert Gordon with Link Wray on Private Stock Records was the result of this collaboration. Due to Elvis Presley's death, the album picked up some airplay, and the label Private Stock tried to hype Gordon as the heir to Elvis. In 1978, Gordon made a second album with Wray, on the Private Stock label, calledFresh Fish Special. The record featured The Jordanaires, who had been background vocalists for Presley, and included the Bruce Springsteen song "Fire", written for Gordon. Springsteen played keyboards on the track.

An advertisement in the March 11, 1978 edition of Billboard magazine read, in part: "Robert Gordon, the new voice of Rock and Roll, and Link Wray, the legendary guitarist, are together again! FRESH FISH SPECIAL follows their red hot first album – and it's a killer! Bruce Springsteen wrote a song for it. Elvis Presley, Gene Vincent, Eddie Cochran and Jack Scott are faithfully remembered in it."

In late 1978, RCA records signed Gordon to a contract which he described as "a dream come true" to be on "Elvis' label". In February 1979 Rock Billy Boogie was released, this time without Wray, as Chris Spedding joined Gordon, playing lead guitar. Writer Bruce Eder (AllMusicGuide) hailed Gordon's next album Bad Boy, released in 1980, as one of the best mature rockabilly albums ever recorded. The next and last album for RCA was 1981's Are You Gonna Be The One. It is Gordon's best selling album to date, with more than 200,000 copies sold.[1] Danny Gatton played lead guitar on this record and Marshall Crenshaw penned the single "Someday Someway" which went to No. 76 on the Billboard charts in 1981.

During the early 1980s, Gordon toured briefly with Gatton. A recording of one of their performances was later released on NRG Records as The Humbler.